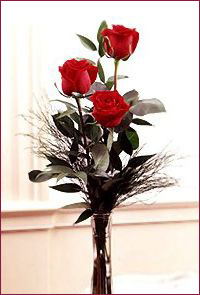 It was a crazy day and probably the most frightening of my (Judah's) life. I will give you a little plot summary so that the video makes more sense.

It was the day of our eleventh anniversary. When she was gone from the house I placed a waxed sealed letter behind a picture frame of us in her room. I quickly left and called her when she arrived at the house and told her to look behind the frame, thus it began.

The letter gave her directions to a clothing store. When she arrived a lady presented her with a long flowing golden dress and a new letter, with more directions. She then went to a shoe store and was given golden slippers and a new note, which took her to a hair dresser.

After getting her hair made up she was whisked away in a white limousine filled with 96 roses (96 + 24 = 120 : I was twenty-four at the the time and I always joked about living to one hundred and twenty. This was me saying that I would give my love to Lorien for my whole life.). The roses were tied in pairs of two with tags that had the word love in variety of languages.

She was then taken to Frederik Meijer Gardens where she was given a map by one of the managers, waiting for her. She then followed the map and a line of roses along the path (and only got lost for a little bit, in which Judah had send random people to pull her back on track). There she found a final note that simple told her to look back and in the distance with a waterfall backdrop was single rose. She walked towards it and Judah came out of a corner to meet her. He then knelt down read a poem conveying his love and lifted the rose, which held the ring in its soft pedals.

After twenty minutes she said yes.

Waiting for them at the exit of the gardens were our friends and her family (up from Ohio) to greet and bless us in our new future ahead.

You can also download the Quicktime movie below, but it is a large file so keep that in mind.

Right click the above link and hit Save Target As.

"If you would marry suitably, marry your equal"
Home | Location & Time | The Wonderful Cast | Pictures of Our Crazy World | The Simple Gift Registry | Contact Us | Last updated: 3/26/06. Website created by Judah Mahay.